How to Age a Deer On-the-Hoof

Part of the selective culling process is to be able to efficiently age deer, and unless the stalker learns and becomes familiar with what to look for, then ageing will always be something of a mystery.

Why is that? It’s because you are familiar with people as a species, and therefore you have come to know what characteristics indicate age or youth. However, many people struggle with the accurate aging of deer.

It need not be a struggle at all. The key lies in being able to recognise the key factors that indicate age and youth. There is no reason whatsoever why deer stalkers cannot learn this. In fact, it is a vital skill required to be able to affect sound and selective deer management.

In Red deer, Fallow and Sika – as well as many exotic species – there exists a clear order of dominance. In humans, a similar system exists in many walks of life, and can be witnessed in many scenarios from company management teams, to prisons through to night club behaviour.

This hierarchical system is in many cases determined by:

Age – generally older deer will assert dominance over younger animals, until there comes a point where they become too old.

Size – as a rule, the larger animals in a group will be dominant over smaller ones.

Mental ability – some animals will be naturally bolder, cleverer or even demonstrate more aggression than others. Such animals tend to be more dominant in a group.

Hierarchical status is never more apparent than during feeding, and mating. The system is seen easily in deer parks where there is opportunity to study captive deer, although it can also be observed in the wild provided the observer knows the signs to look for.

Often this display of pseudo-aggression is sufficient to make things clear to other animals, however occasionally their dominance is challenged by a younger beast, and physical contact from simply an antler clash, or a full-on fight can occur.

This sometimes results in the younger – often stronger animal displacing the aggressor. From that moment, herd dynamics begin to change until the ‘pecking order’ has been established.

This order of dominance can also be seen in females, again especially during feeding. Occasionally the female will use physical force, often by biting or striking with their front feet.

In most, but not all cases, the order of dominance in the herd is directly related to age. The older generally being more dominant, and the younger animals being sub-dominant.

Back – in general, the shape of the back in a young animal will be relatively flat. As the animal ages, then there is a progressive sagging in the back where years of supporting the weight of their abdomen and it’s contents gradually distort the staple of the spine causing the sagging appearance.

Of course there is always the occasion where the genetic make-up of the animal may determine its shape to an extent, so you should bear this in mind when aging. For this reason, it is important that you always look at as many features as possible before making a definitive decision on the age of the animal.

Belly – Generally the older an animal gets, the more the belly sags. This can be used as an aid to on-the-hoof aging, although this must not be confused with an animal that is in the latter stages of pregnancy – another reason why you need to look at several features rather than just relying on one.

It must also be remembered that some types of illness, such as build up of abdominal fluid caused through some heart disorders, bloat, or ruptures in the abdominal wall (hernias) will also cause the abdomen to appear distended.

Backside – As with humans, the rump generally gets bigger and rounder with age, and so this can also be used to assist in determining the general age of a deer.

In the younger animal, the rump tends to be more angular in its features. However, in a really old – or ill – animal, the rump can appear angular simply through loss of condition, so once again, this feature should only be used in conjunction with all other signs.

Whilst antlers can be used as a means of determining age, the antlers of deer can be misleading as their growth depends on several factors including weather, feed nutrition and also genetics. Any form of metabolic stress can result in reduced antler quality, shape or size, and physical damage to the growing tissue can cause abnormal growth patterns.

However, there are some characteristics that can be used to assist in age assessment. These are:

Shape – Apart from telling the difference between a first and second head, antler shape has relatively little relation to age, other than those features mentioned below in ‘profile’.

Weight – In General terms, antler weight (thickness of beams) especially at the coronet and lower beams will usually increase with age, although as stated above, environmental influences and feed quality can affect antler development for that year.

Size and number of points – This can have very little value as a means of aging live deer. For example, a ten-year-old Scottish hill stag may have only short eight-point antlers, whereas park-bred Reds can produce extraordinary antler development relative to feeding and genetics.

The world record Red deer spiker (born on a New Zealand deer farm) had a head of 41 points as a result of genetic superiority and excellent feeding.

Profiles – The side profile of antlers can provide a better indication of age. As a deer ages, then the top points can be as long as the brow, bez and trez points. This gives a side profile resembling a rectangular shape.

This generally changes as the animal gets older, and as it does there will eventually be a deterioration in development towards the top of the antlers, but the coronets and lower beams will remain relatively thick and heavy. This ultimately leads to a more triangular side profile.

When a male deer becomes past his prime (termed as ‘going back’) this triangular profile becomes progressively more apparent year by year.

Facial features – As with humans, the facial features will change as the deer becomes older. In a young deer, there will generally be a more youthful look to its face.

The eyes will be bright, generally with relatively longer eyelashes, and the bone structure will appear lighter and sharper. As the animal ages, these features fade to a point where the animal appears less bright in the eye, and the face takes on a more haggard appearance.

Length of nose – The length of the nasal bones generally appears to be quite short and stubby, and the side profile of the head could quite easily fit into a relatively square shape.

As the deer ages, it’s nose will generally appear longer – fitting into a more rectangular profile. However, be cautious about relying solely on this as a means of aging as genetics can play a big part in this. For example, the Eastern European strain of Red deer is characterised by having much longer nasal bones than their Western European counterparts.

It must be remembered that attempting to age deer on-the-hoof by using only one indicator is likely to mislead the observer and lead to mistakes being made. It is important to take all the above indicators into account before deciding on the age of the animal.

Because on-the-hoof aging of wild deer can be an in-exact science, then it is advised that you simply break down the ages into the following sectors: 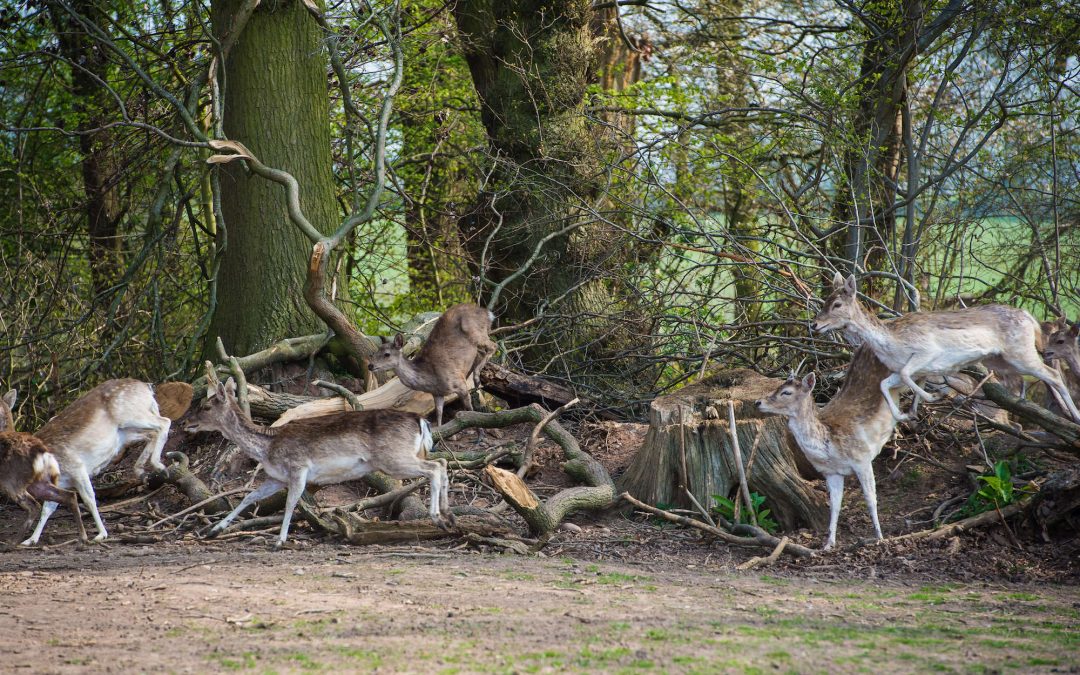