Hell Hath No Fury Like An Aggressive Red Deer Hind

On deer farms, and in some parks, there will always come a time when handlers need to get close to the animals for a variety of reasons.

Handling any large animal always carries some risk, and the level of risk will depend on several factors including:

This article seeks is largely to advise those involved in deer handling or the would-be handler, of the type of experiences they may face. More importantly, it is to raise awareness of the dangers of handling Red deer hinds, and ways
in which handlers can minimise or eliminate much of the risk.

As we have covered the handling of Red deer stags in another article, there is little point in repeating much of it here. However, apart from the sex of the species (stags V hinds) there are a couple of fundamental differences in the manner in which we should handle each.

Firstly, it’s worth bearing in mind that MOST people handling stags will already be on their guard – never taking an eye off what the stag is doing whilst the handler is exposed, and carrying out the required task using every available means to prevent exposure to injury – or worse!

In contrast, many handlers are much more complacent when handling Red hinds, and that can be a recipe for disaster. It is not unreasonable to suggest that handlers can be equally at risk – sometimes more so – whilst handling Red hinds.

The task to be carried out will have a great influence on the behaviour of the animal in response to what we do. For example, monthly weighing – a non-invasive, non-stressful operation – should result in animals being relatively relaxed about being in the handling system.

However, in the case of ear tagging, wormer injections etc., animals can respond violently to an event that it knows is going to hurt.

The way in which the animal is likely to respond in the future is greatly influenced by the actions of the handler during each handling session.

The rules are simple: Hurt the animal, cause the animal discomfort and pain, or frighten the animal, then you will suffer the consequences in the future. The affected animal will remember the event that caused discomfort, and that will cause it to fear.

Remember that a frightened animal is effectively a dangerous animal. All animal handlers have both a moral and legal responsibility to avoid causing unnecessary suffering to any animal.

There are almost as many different variations of handling system as there are deer farms.

Types and build quality vary greatly from those that are constructed from the finest materials and designed for every eventuality in handling terms, to those that are very much in the “Heath Robinson” bracket just basic structures designed for single functions.

Build quality aside, few handling systems work well unless they are designed by operators who understand Red deer.

Knowledge of the way they will behave in an enclosed system scenario is the single most important factor that will lead to a safe, humane and efficient system.

In reality many systems that lack visually pleasing features, can in fact work like a dream extremely effectively – because they were designed well.

Good understanding of what a Red deer is likely to do in a given scenario will form the basis of good handling system design.

Many successful deer farmers use subdued or red lighting in systems, and this certainly helps to keep animals calm in what is otherwise a stressful situation. Whilst subdued lighting has its advantages, this is only viable when integrated with sound physical design features.

Deer handlers can make a huge difference in animal response – both positively and negatively – to handling events.

Some of these influences are obvious, such as being quiet, calm, unhurried and using comforting voice that goes some way towards projecting a positive aura, and relaxing the animals.

Some are not so obvious, but can nevertheless have a profound effect on animal behaviour. As with humans, animals pick up very quickly on negative energies.

If the handler is agitated, angry or upset, then this will manifest itself in the manner in which the handler works.

Equally if the handler is rushing to get the job done, then the level of care during handling will be somewhat deficient. Any sort of aggression towards the animals should warrant suspension of the handling session.

Therefore it goes without saying that all handling operations need to be planned in advance so that handlers are in the correct frame of mind to effect compassionate and positive handling techniques.

Temperament of the wild animal

I have purposely left this subject to last, in favour of getting handlers to address all the previous issues first.

In actual fact, the temperament of the animal is one of the most important influencing factors that will determine the level of risk handlers are exposed to.

Animal temperament should be assessed on an on-going basis, and measures implemented to ensure that those identified as being bad-tempered are dealt with in the appropriate way.

Temperament is a highly heritable genetic trait, and habitually bad-tempered hinds will invariably typically give birth to bad-tempered calves.

As far as commercial deer farming is concerned, then we should adopt one very simple but effective rule:

THERE IS NO PLACE FOR RED HINDS WITH TEMPERAMENT PROBLEMS IN WELL-RUN DEER FARMS!

Such animals always cause other animals in the group to become agitated. They always present a significant danger to handlers. The nature of Red deer hind attacks are such that head injuries are a real possibility for handlers.

Both statistically and in reality, deer handlers are at greater risk of injury from aggressive Red deer hinds than they are from stags. So why is that?

The reasons for this are:

Whilst a shield is a must in this situation, it is relatively easy for the hind to knock the shield down with one front hoof and bring the second front hoof down on the handler’s head or face, so the shield needs to be designed in such a way that you can maintain control of it, even during a sustained attack.

Warning Signs of Imminent Attack from a Red Deer Hind:

ALWAYS carry out a risk assessment before handling any deer.

NEVER handle any mature deer alone, even if you believe them to be calm.

ALWAYS use protective head gear and shields when handling a Red hind.

NEVER ignore any of the above warning signs.

NEVER turn you back on a hind that you suspect to be aggressive.

ALWAYS record the tag number of hinds that demonstrate aggressive tendencies. That way you can prepare for them in subsequent handling sessions.

If an attack occurs, ALWAYS keep your head and face protected with a shield and call for help immediately.

AGGRESSIVE HINDS should ALWAYS be culled once aggressive tendencies have been identified. 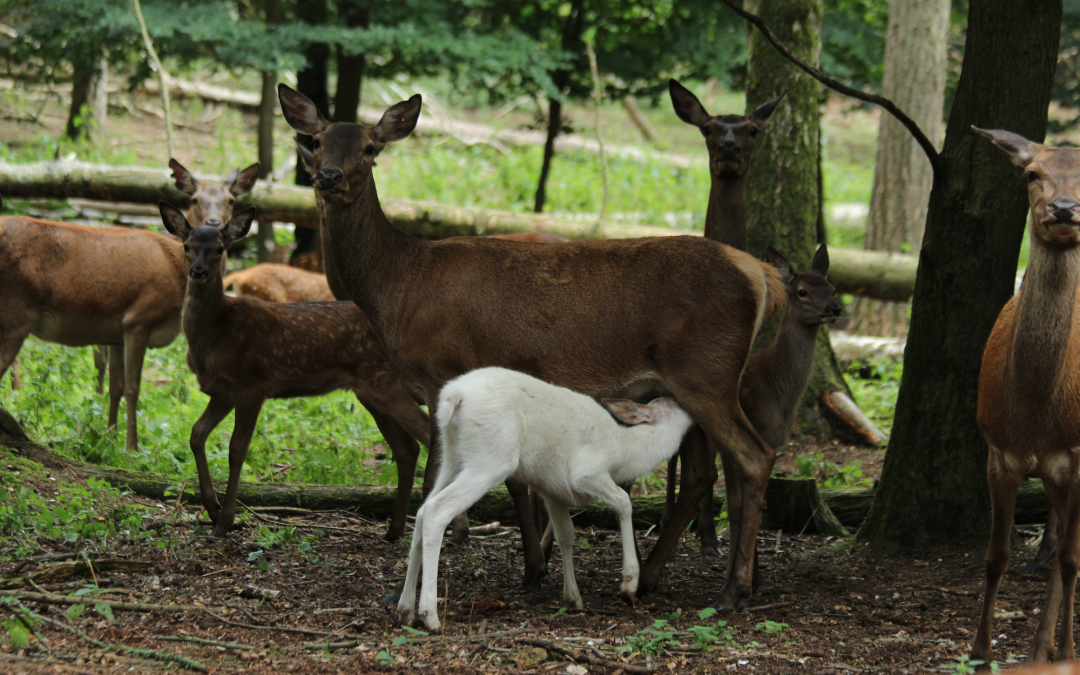 Occasionally within a Red deer herd there occurs a very pale, grey to almost white deer.